Explorer of the stratosphere, the first man to witness the curvature of the earth, he paved the way for modern aviation.

Best known for his exploits in the stratosphere and the ocean depths - incredible for that time - Auguste Piccard was above all a physicist of genius. He tested all his inventions himself: the pressurized capsule and the stratospheric balloon, which opened the door to modern aviation; the bathyscaphe, which settled on the ocean floor at the bottom of the Marianas Trench ; not to mention the most accurate scales and seismographs of the time. A friend of Albert Einstein and Marie Curie, he was a true Renaissance man who discovered Uranium 235, and was ahead of his time with his enthusiastic involvement in nature conservation. It is no wonder that Hergé used him as the model for Professor Calculus in the Tintin series.

Exploration, the sport of scientists

Validating his invention of the pressurized cabin.
Opening the way to the conquest of space.

Taking his laboratory to the depths under investigation

Heroes of the popular imagination 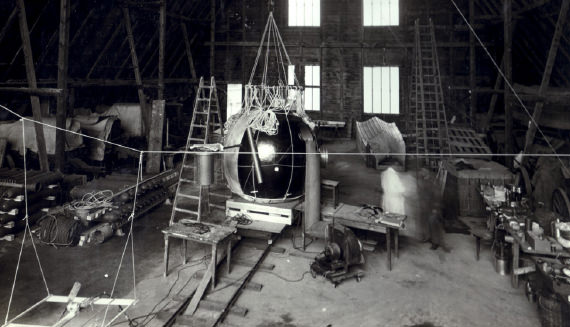 Technical specification in PDF format.
This content was developed by and Is the property of the Musée du Léman, all rights reserved.

This content was developed by and Is the property of the Musée du Léman, all rights reserved.

The Belgian National Scientific Research Fund (FRNS), founded on the initiative of King Albert I, financed the construction of this balloon. In recognition, Auguste Piccard named his balloon FNRS.

At an altitude of 16,000 m in the stratosphere, the air pressure is only one tenth of what it is at sea level and the temperature is -60 ° C! Man can only survive inside a sealed cabin. The first flight in the stratosphere was Auguste Piccard’s 13th balloon ascent... but he laughed off superstitions about the number 13, quoting his friend Einstein: «God does not play dice! »

The German authorities tried to ban the ascent. Since Piccard was Swiss and a member of the Aero-Club of Bern, he obtained an authorization from Switzerland. Then, at the last minute, the Germans insisted that helmets be worn. Madame Piccard cobbled two together using available materials - baskets and cushions. Auguste Piccard and his teammate Paul Kipfer then obtained the necessary authorizations! In flight, the cushions served… as cushions, and the baskets as storage bins.

No water left on board!

The watertight cabin was painted white one side, black the other. This was supposed to help maintain a pleasant temperature in the cabin, day and night. Unfortunately, the motor fitted to turn the correct side around into the sun was damaged on take-off. The explorers went from sub-zero to +40 ° c! In this heat, water quickly ran out on board. They collected condensation on the cabin walls to have a little something to drink ...
Because of a valve problem, the balloon was longer than expected returning to Earth. The press announced the demise of this daring duo who had dared to examine the sky close up …

Discovery on the Gurgl Glacier

This cabin door handle from the FRNS had been lost in 1931 just after landing ... and was rediscovered by chance in 1990 by an Austrian mountaineer. It was offered as a gift to Bertrand Piccard, who had also become a balloonist, in tribute to his grandfather.

Records are to be beaten

Interviewed about the risk that his records might be beaten, Piccard responded: «It will be a great day for me when other stratospheric balloonists come along and exceed the altitudes I reached. My aim is not to beat records, still less to retain them, but to open up a new zone for scientific research and air navigation … »

Questions on the FNRS balloon put to Prof. Auguste Piccard and to Prof. Jacques Piccard

Prof. Jacques Piccard
Were you anxious for your father?
How was your father dressed for his expeditions?

This content was developed by and Is the property of the Musée du Léman, all rights reserved.

Bertrand Piccard practices self-hypnosis. He speaks openly about beauty and about why the adrenaline

A century of explorers